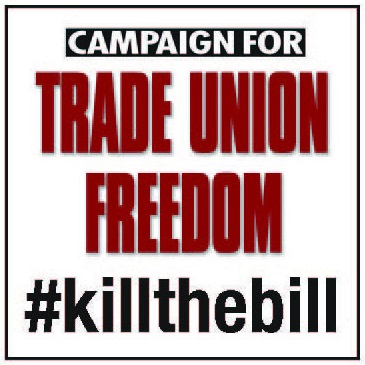 On 15th July 2015, the Government introduced the Trade Union Bill in the House of Commons. The Bill sets out a number of changes to the Trade Union and Labour Relations (Consolidation Act) 1992 that constitute a major attack on trade union rights. In separate legislation, the government plans to repeal the ban on employers hiring agency workers to provide cover during strikes.
Key changes include:
New turnout thresholds for strike ballots – A minimum 50% turnout in all industrial action ballots, and 40% of those entitled to vote must be in favour of industrial action in certain essential public services.
New information requirements relating to industrial action – additional information in the ballot paper and information given to union members and to the Certification Officer (CO) following a ballot.
New requirements regarding the timing of industrial action – two weeks’ notice (up from 7 days currently) of any action to be given to an employer, and expiry of a ballot mandate for industrial action after 4 months
Additional requirements on unions for the supervision of picketing including appointing a picket supervisor and informing the police of the supervisor’s name and the location of the picket.
A requirement for trade union members to opt in to the union’s political fund. After 3 months from commencement of the new law, unions will not be able to collect political fund contributions from those who have not actively made a choice to contribute.
New requirements on unions to include more detailed information on expenditure from political funds in the annual return to the Certification Officer.
New regulation-making powers regarding union facility time in the public sector, for the purpose of promoting transparency and public scrutiny of facility time and encouraging employers to moderate the funding of facility time.
New investigatory powers available to the Certification Officer, including the power to direct a trade union to produce documents in connection with an investigation of non compliance.
New sanctions available to the Certification Officer including the power to impose a financial penalty of up to £20,000 on a trade union for breach of a requirement or rule.
A new power to impose a levy on trade unions to cover the Certification Officer’s costs. The CO’s costs are currently met by ACAS which is funded by the Government
The second reading of the Bill is expected to be in October and the consultations (running to a shortened timetable) close in September. The campaign against this therefore needs to get underway quickly and the CWU has committed to play a full part in it. This commenced with a major public meeting on Wednesday 29th July with numerous organisations coming together under the banner of “Kill the Bill”. CWU General Secretary Dave Ward was one of the guest speakers.