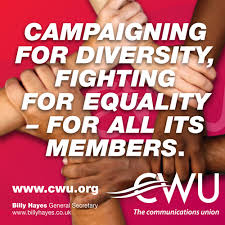 The CWU held four Equality Conferences in October and November and CWU Mersey Branch were represented at all four.

Here’s a brief excerpt from some of the written reports received from the attendees.

Dave Ward gave an address about mobilising the union against austerity and the upcoming government cuts at the opening of the Disability Conference. Jacqueline Stewart, chair of Northwest equality committee, promoted the disability champion course  so that equality officers can understand the Equalities Act 2010 and the implementation of “reasonable adjustment of the work place”.

Guest speaker was Ian Tasker who is the assistant secretary of  the Scottish TUC. He spoke about the problem we are going to face with the trade union bill, benefit cuts. He also spoke about disability hate crime that it in increasing year by year.

Another guest speaker John Meehan from Heads up Scotland talked about cancers that affect only your head and your neck. There are 50 known cancer affecting your head and neck.

Eurig Scandrett from Scottish Friends of Bophal was a second speaker. He spoke on the chemical disaster that happened on 3rd December 1984 and still waiting for compensation.”

Tribute was made for Denise Marshall the former Chief Executive of EAVES Housing for Women. Denise helped vulnerable women fighting to end violence to women and children.

Dave Ward, General Secretary welcomed all the women, old and new delegates, and all the women in the CWU as women have an important role in the union and also most importantly they are now getting better representation.

Dave also mentioned that issues important to women should be dealt right across the union and not just by women.

As a first time delegate to the Black Workers Conference, Clare Cruikshank, Branch Treasurer found the experience very enlightening and it was interesting to listen to speakers who care passionately about the subject they were talking about.

The day started with a speech by Dave Ward where he touched on the refugee crisis and how CWUHA had been involved with providing aid.  He also discussed his visions for the future of the union, and advised he’s looking into having an Equalities day during general conference.

There was only one contentious proposition about the CWU organising a ‘solidarity’ trip to support migrants in Calais.  Initially there was some opposition to the proposal until Ali Moussa told us of his parents experience when they came to the UK from Uganda in the 70s.  What they remembered the most were the kind words and support from people, who had nothing else they could afford give.  When it came to vote, the prop was passed.  Several more props about the refugee crisis were then passed

Peter Pascall, Branch Equalities Officer moved a proposition on behalf of the Race Advisory Committee (RAC) about the use of social media, and the need to get copies of the DRUM (CWU Magazine produced by the RAC) out to branches in order for them to share with BAME members.

The final prop discussed was about the lack of facilities time for BAME officers and the need to negotiate for recognition of the role with employers.  Although the prop was aimed at Postal Workers, BT people advised they experienced the same problems.  Peter again rose to talk on the prop and stated that we must make sure the role of the BAME officer does not become a ‘box ticking’ exercise.

The guest speakers were Graham Campbell and Deborah Cole.  Graham told us about justice campaign for Sheku Bayoh who died in police custody earlier this year, after he was sprayed with CS gas and pepper spray and then sat on by 2 police officers, one weighing over 20 stone!

Deborah discussed how there have been 5,219 deaths in prison and police custody in England and Wales since 1990.  She pointed out that 14%of the population are BAME, yet they account for 24% of the deaths in custody.

If you’re interested in getting involved in the Equalities Agenda in the Union get in touch with Peter Pascall, Branch Equalities Officer or Branch Secretary, Rob Alldritt.